A Friday Thursday ritual. A single photo-no words- capturing a moment from the week. A simple, special, extraordinary moment. A moment I want to pause, savor and remember."SouleMama". 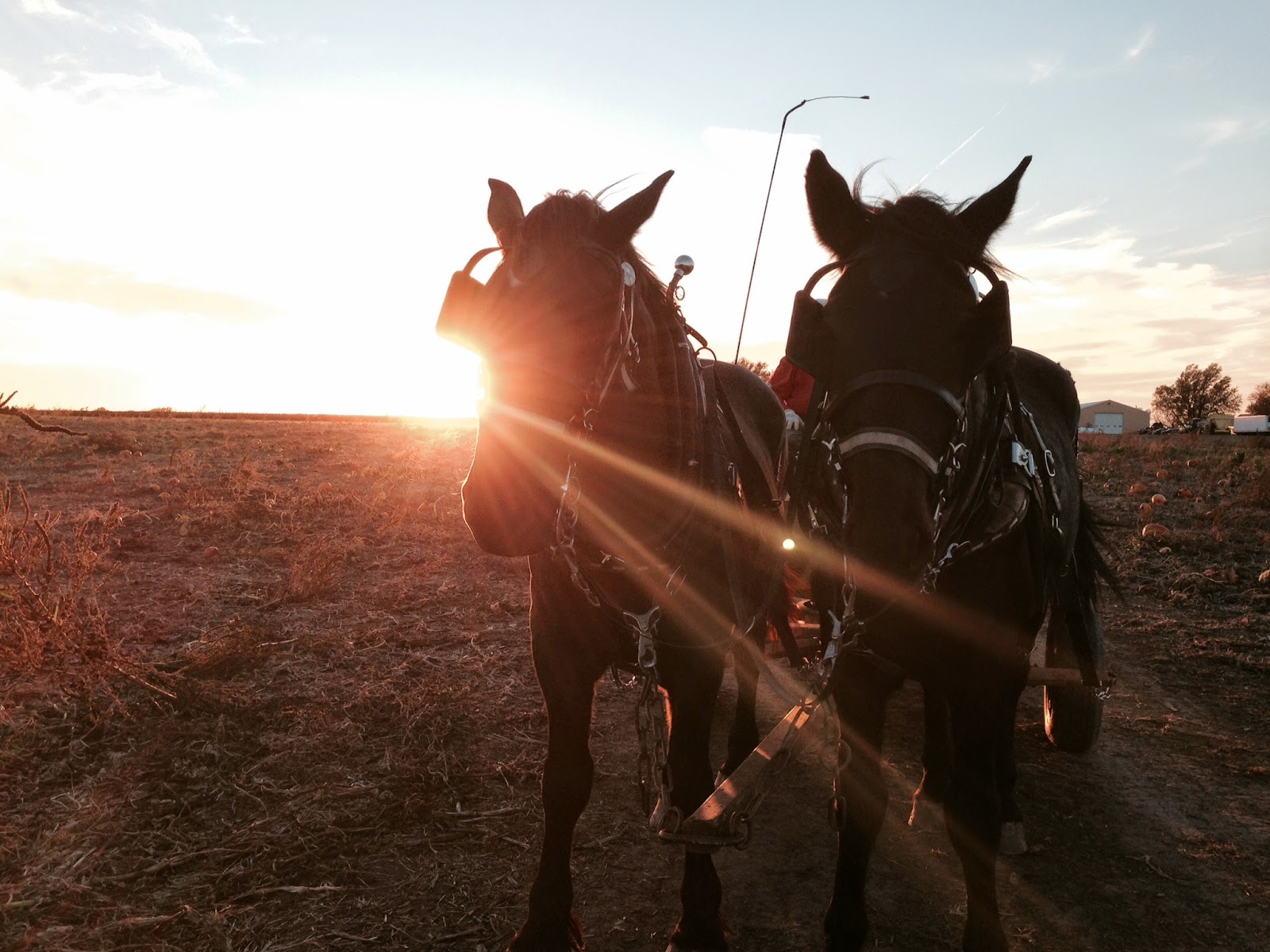 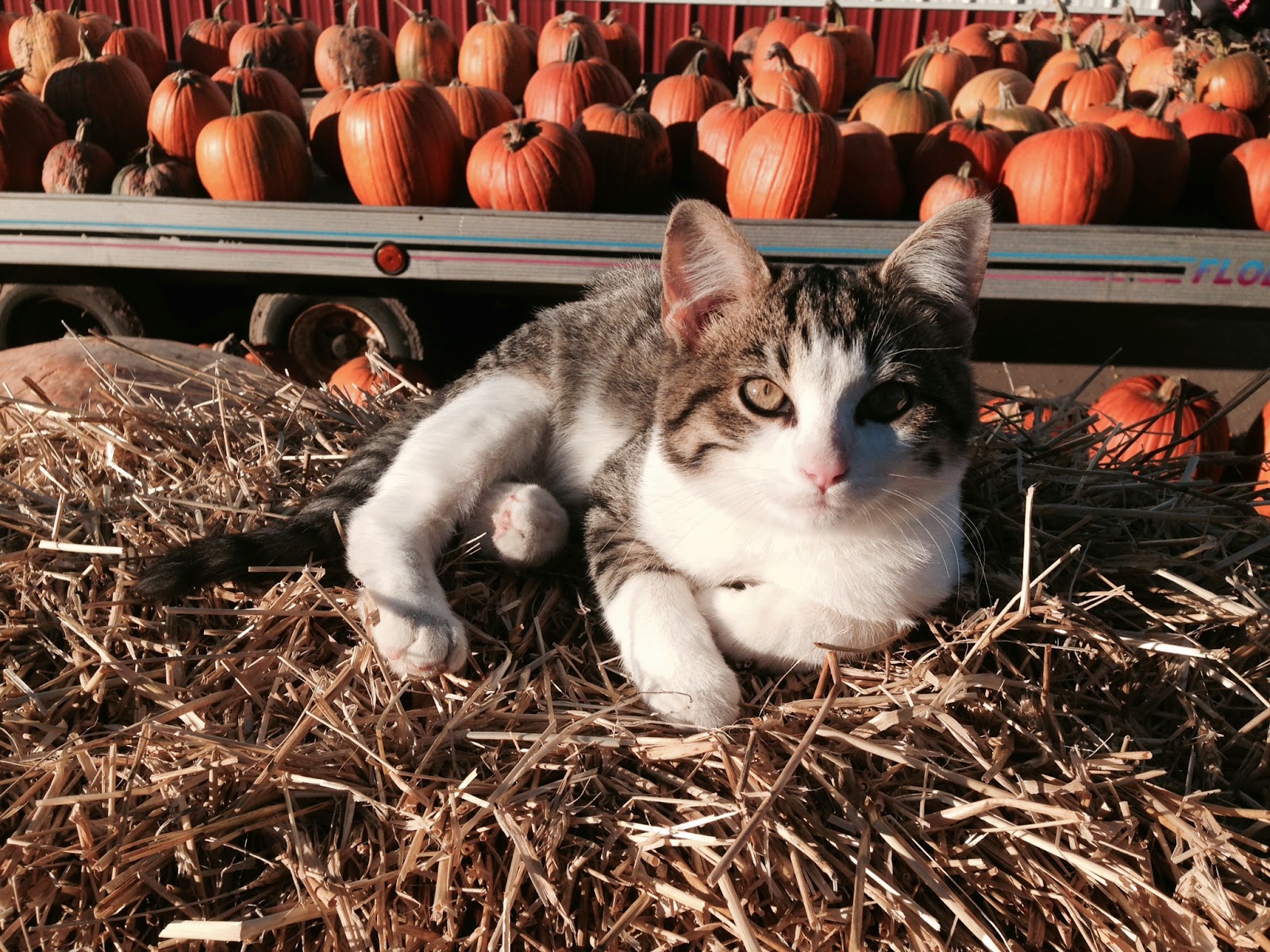 Our family is in a rush trying to get everything ready for a road trip to see some old friends, but we had to take some time to slow down, step away, and make time for our Autumn Tradition. 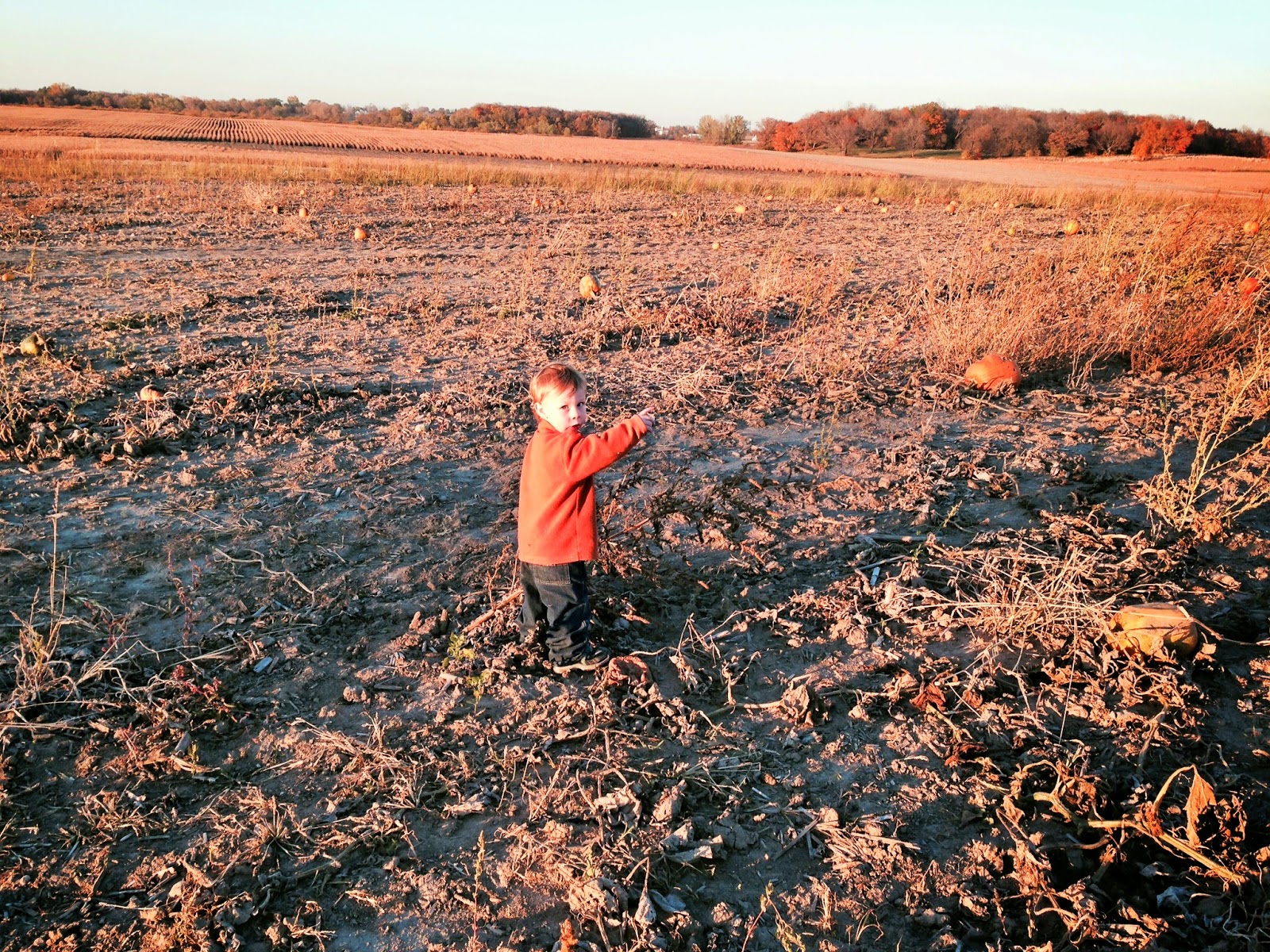 This week we made time to visit our local pumpkin patch. Panda spotted a cultivator harvesting corn in the distance and took off like a racehorse. He loved the rocks, the dry packed earth, corn kernels strewn like jewels in the dust,  but he could have cared less about the pumpkins. I'm sure that will change when he learns they are eatable. This year the farm had these wonderful peddle tractors. For Panda it was love at first sight. 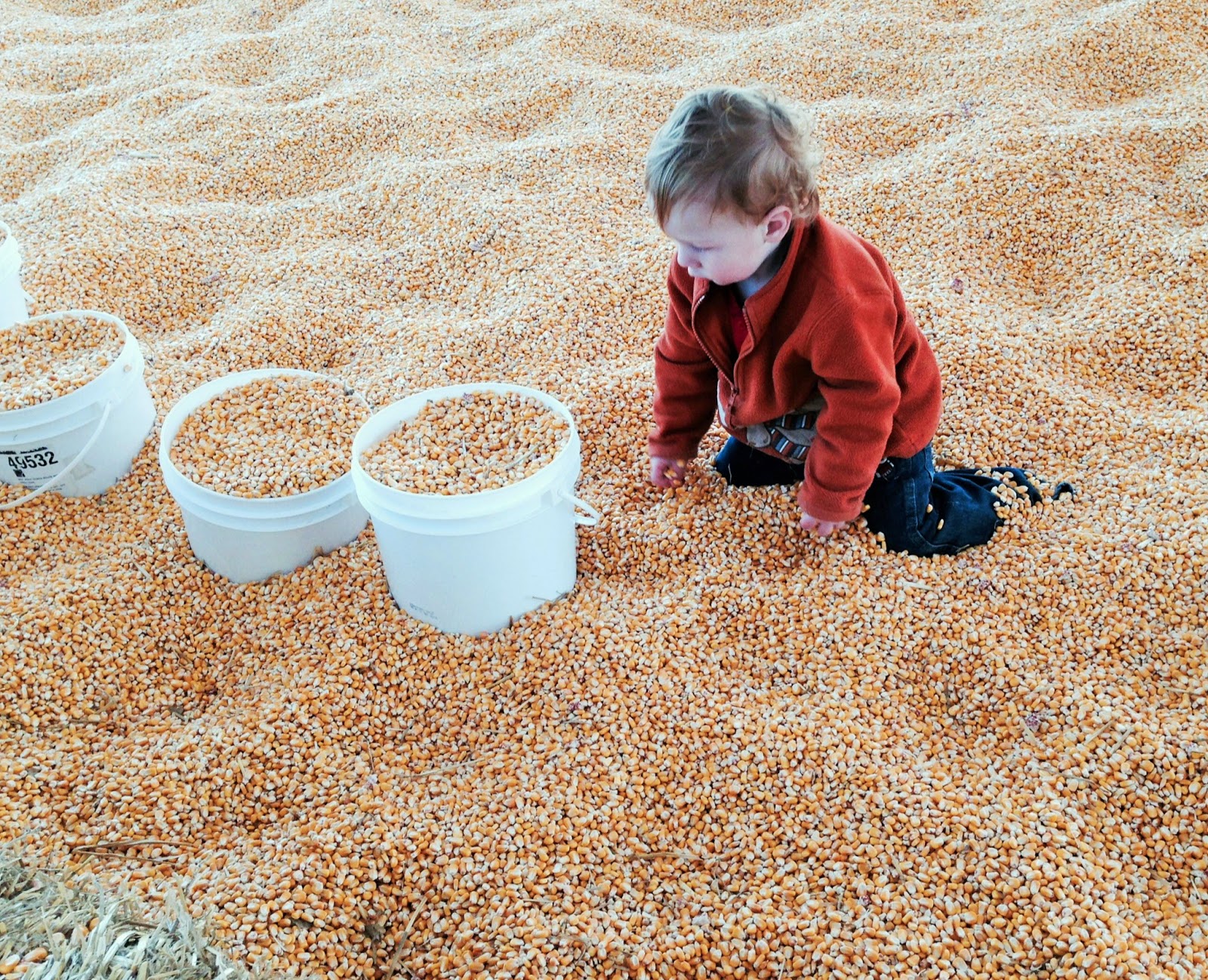 There was also a corn pit. It might just be the biggest corn pit I have ever seen. Since we went during the week there was no one else there and Panda was in bliss. I thought it would take an army to get him out of there, but he was actually very well behaved... And very tired. 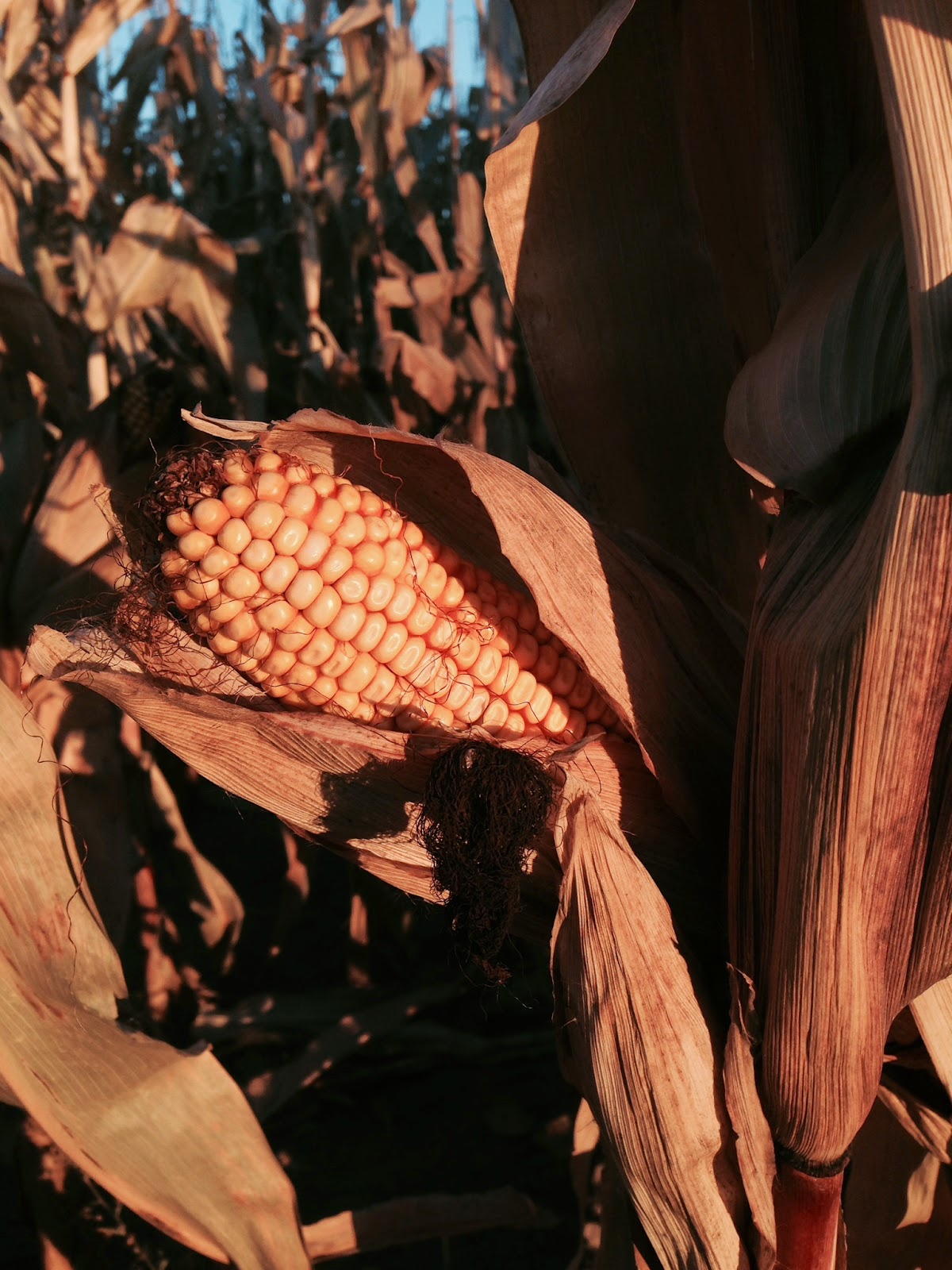 What Autumn traditions have you been enjoying with your family?
Be well and shine on.

A Friday ritual. A single photo-no words- capturing a moment from the week. A simple, special, extraordinary moment. A moment I want to pause, savor and remember."SouleMama". 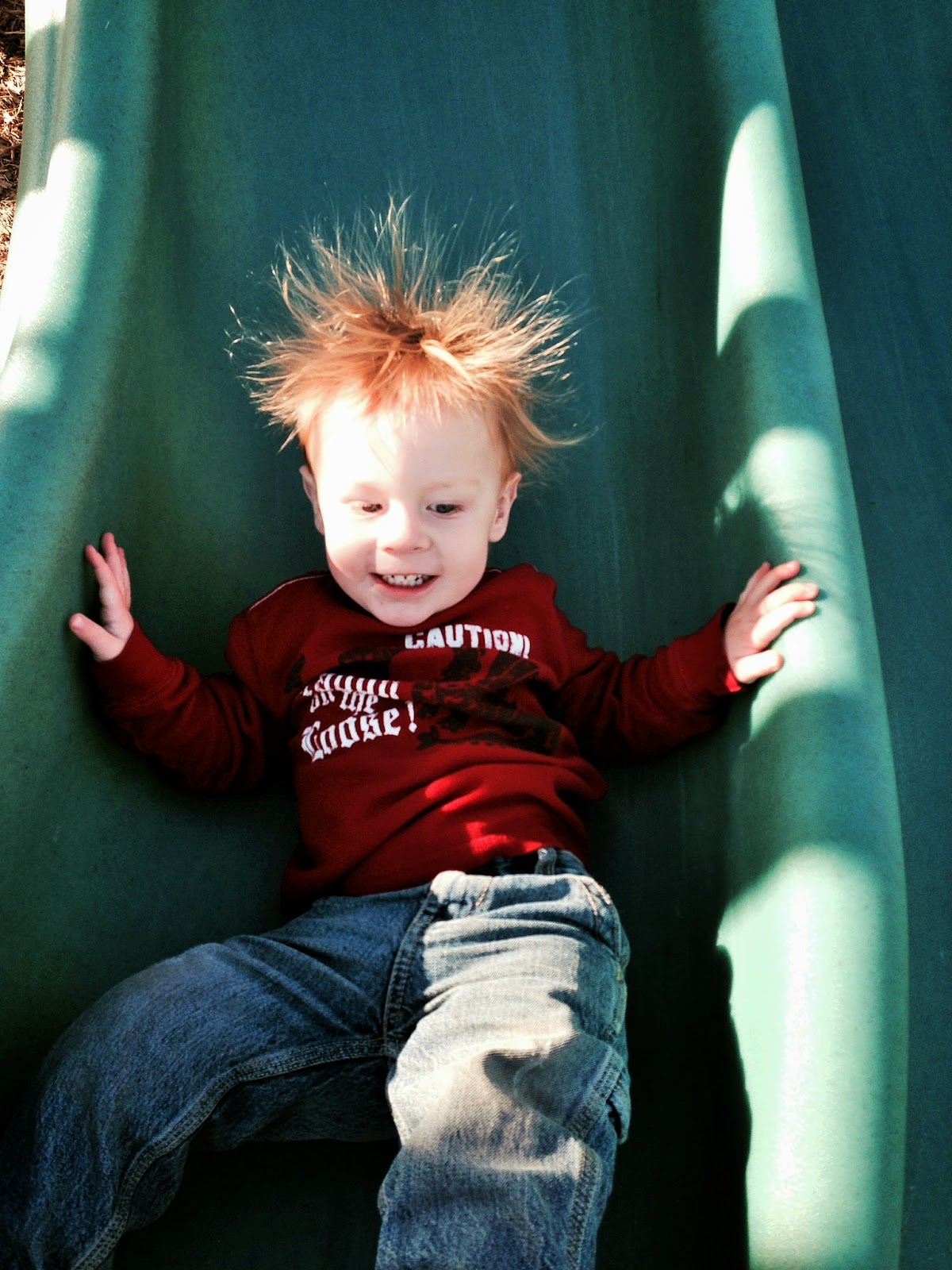 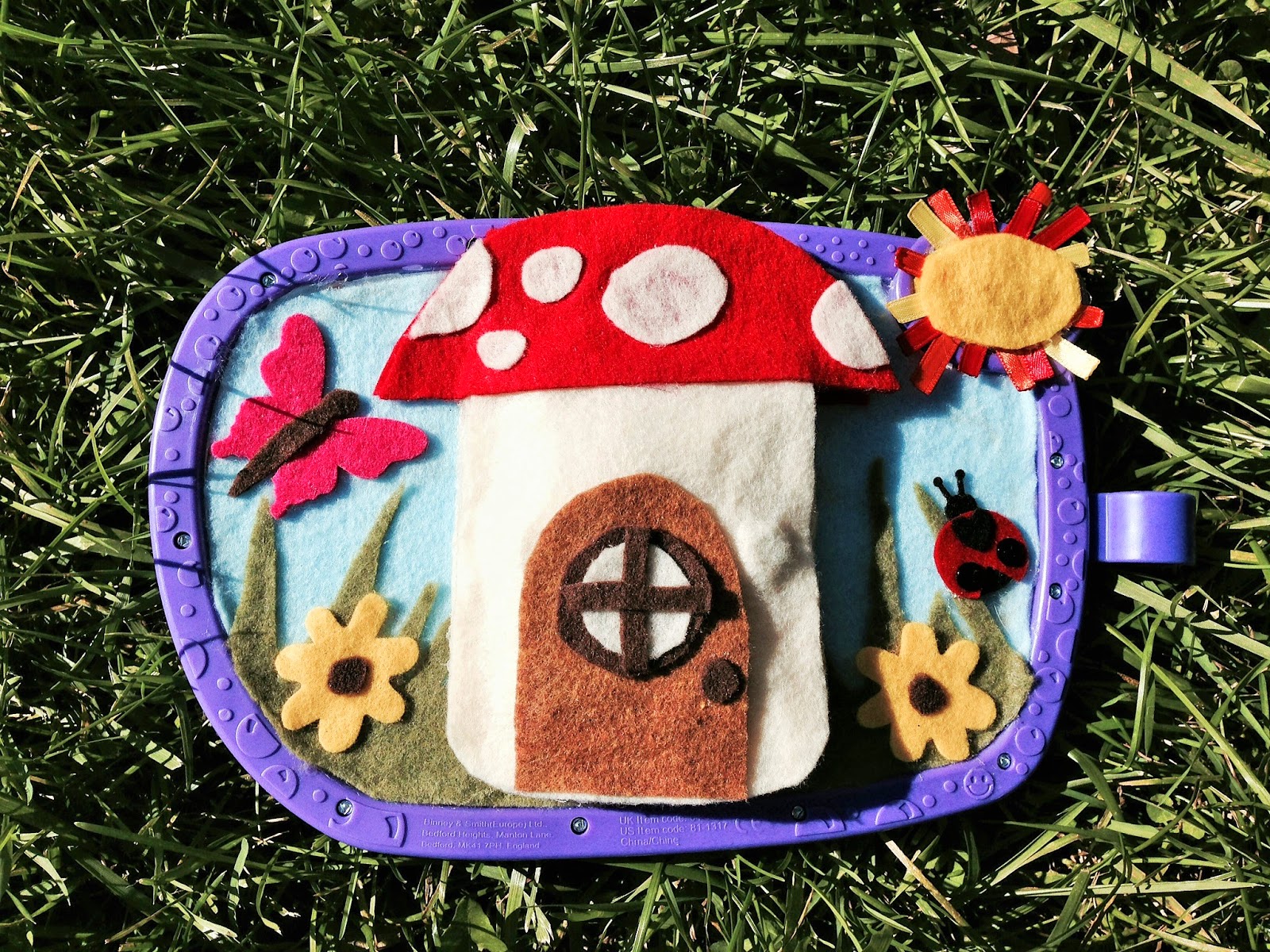 This was a  project I just threw together, but it turned out super cute so I wanted to put it on my blog as an idea for other crafty people. We are going on a road trip in a few weeks and I've been busy putting together car activities for Panda; this is one of them. 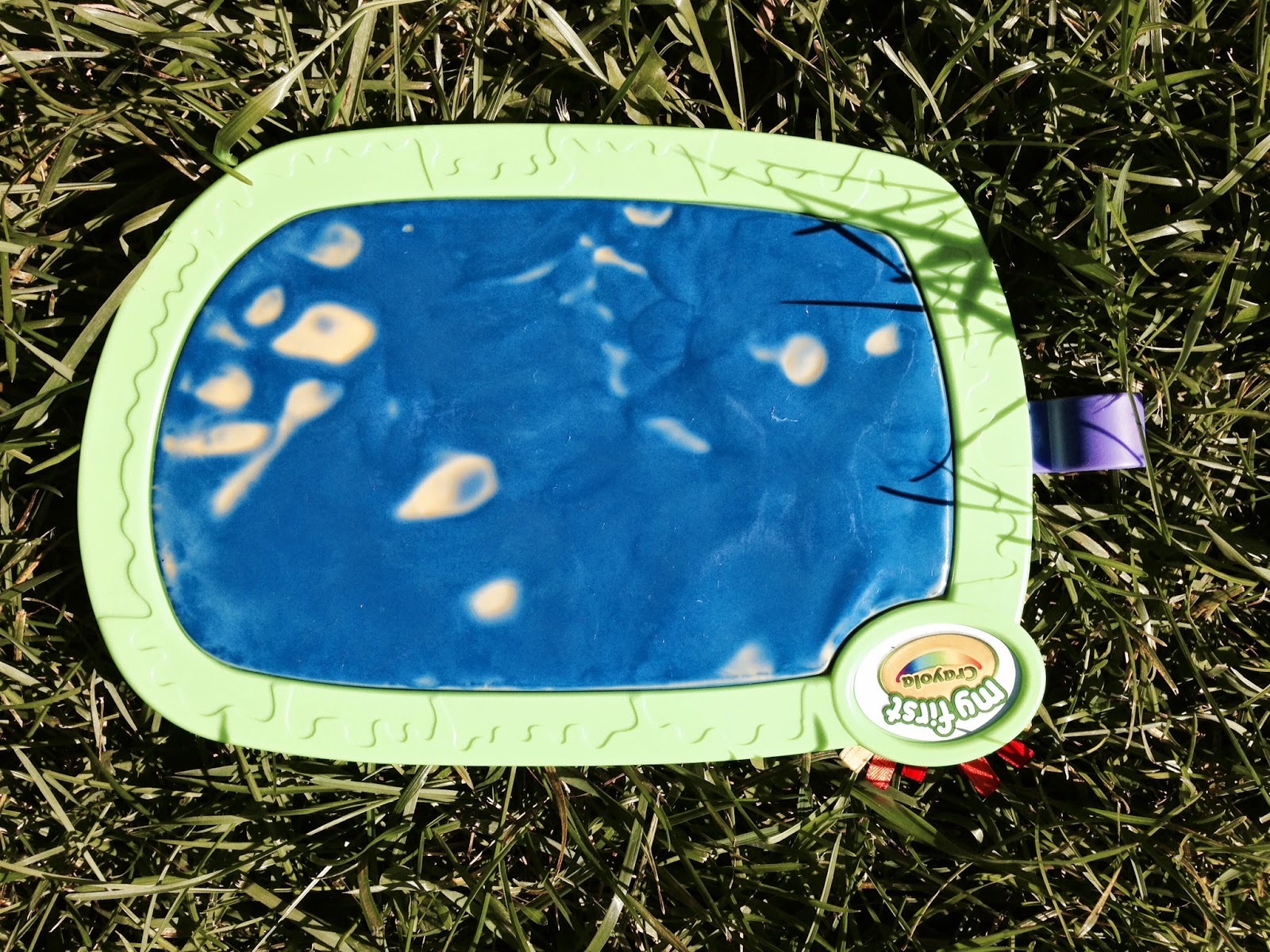 I found this jell finger painting type frame on clearance at the toy store (it is similar to paint in a Ziploc baggie, but a little more resilient). On the back was a water color type board that didn't work for Panda. It required water to work and Panda wanted to suck on the pen/brush that came with it. So I decided to make a finger puppet house on that side (any frame, or even a lid for a tin would work for this if someone wanted to recreate one). I was a bit rushed so I just hot glued everything down instead of sewing. The puppets however are sewn. When the jell side breaks down I will likely make another puppet scene on that side as well; likely dinosaurs and a volcano. 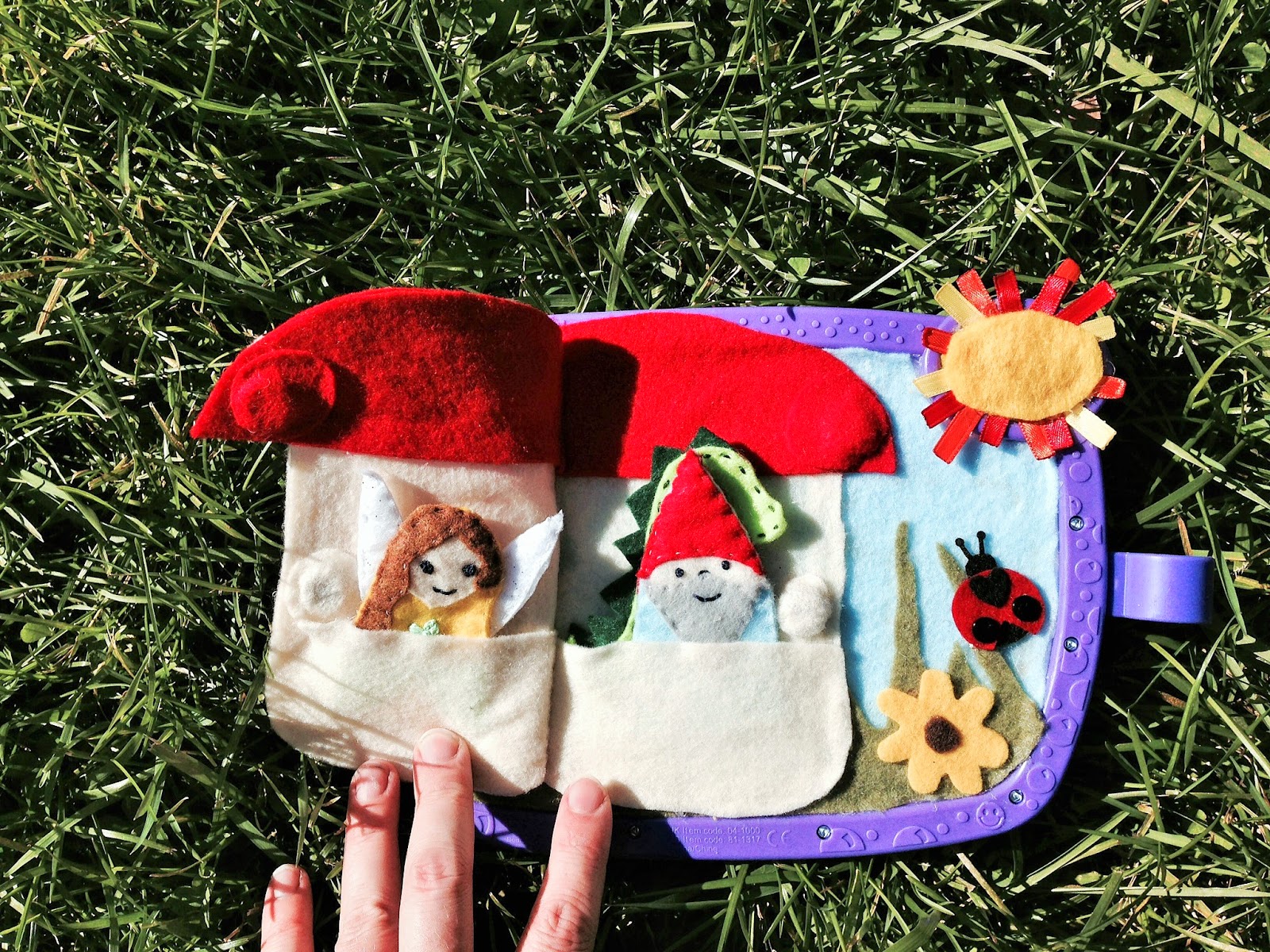 The house opens up and reveals two pockets with three puppets. It closes with magnetic closures. The sun is made with heat-sealed ribbons and works like a mini taggie. 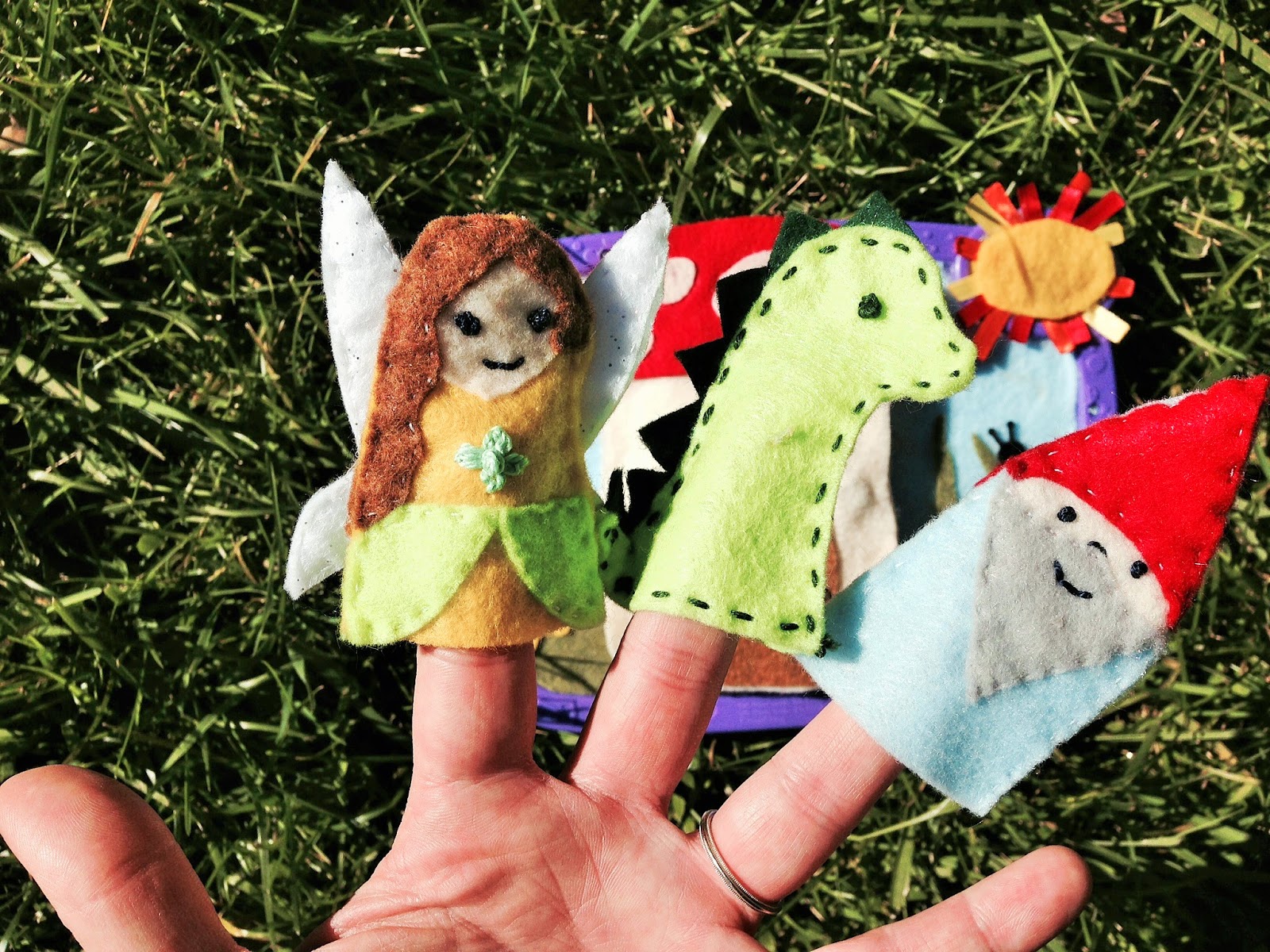 Here are the three puppets. I just searched "Felt Finger Puppet" on Google and eyeballed pictures for the patterns. They are based on other peoples work so I wont be posting patterns for them.
It turned out pretty well for a quick project. I hope Panda likes it. I'll be posting our list of car activities when we get back with reviews for each one on how well they were played with. Have a blessed week and Shine on!
Posted by Appleshoe at 12:09 PM 2 comments:

Playing along with Mothering With Mindfulness today.
Three little windows into our day 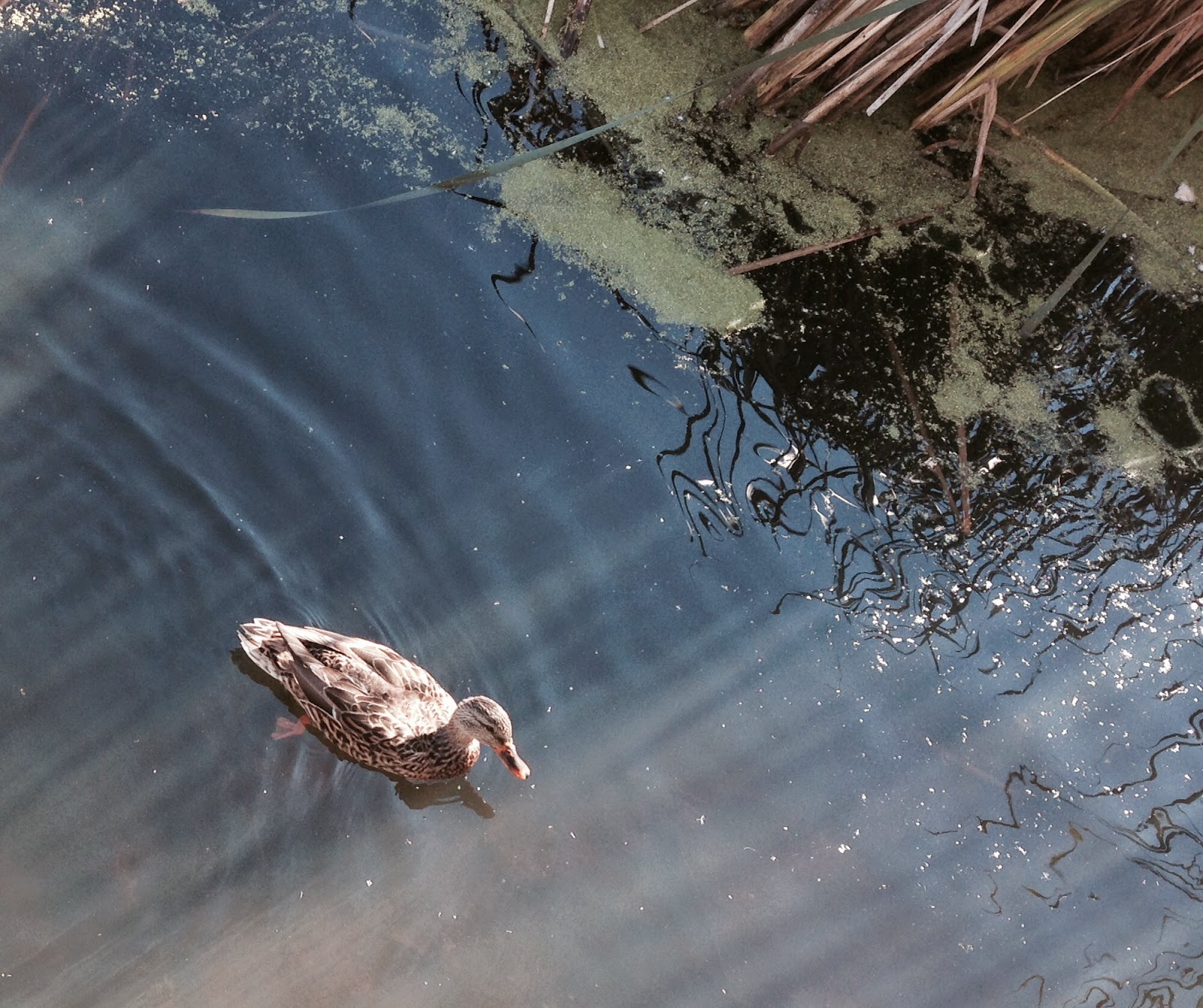 Morning walk to the duck pond. 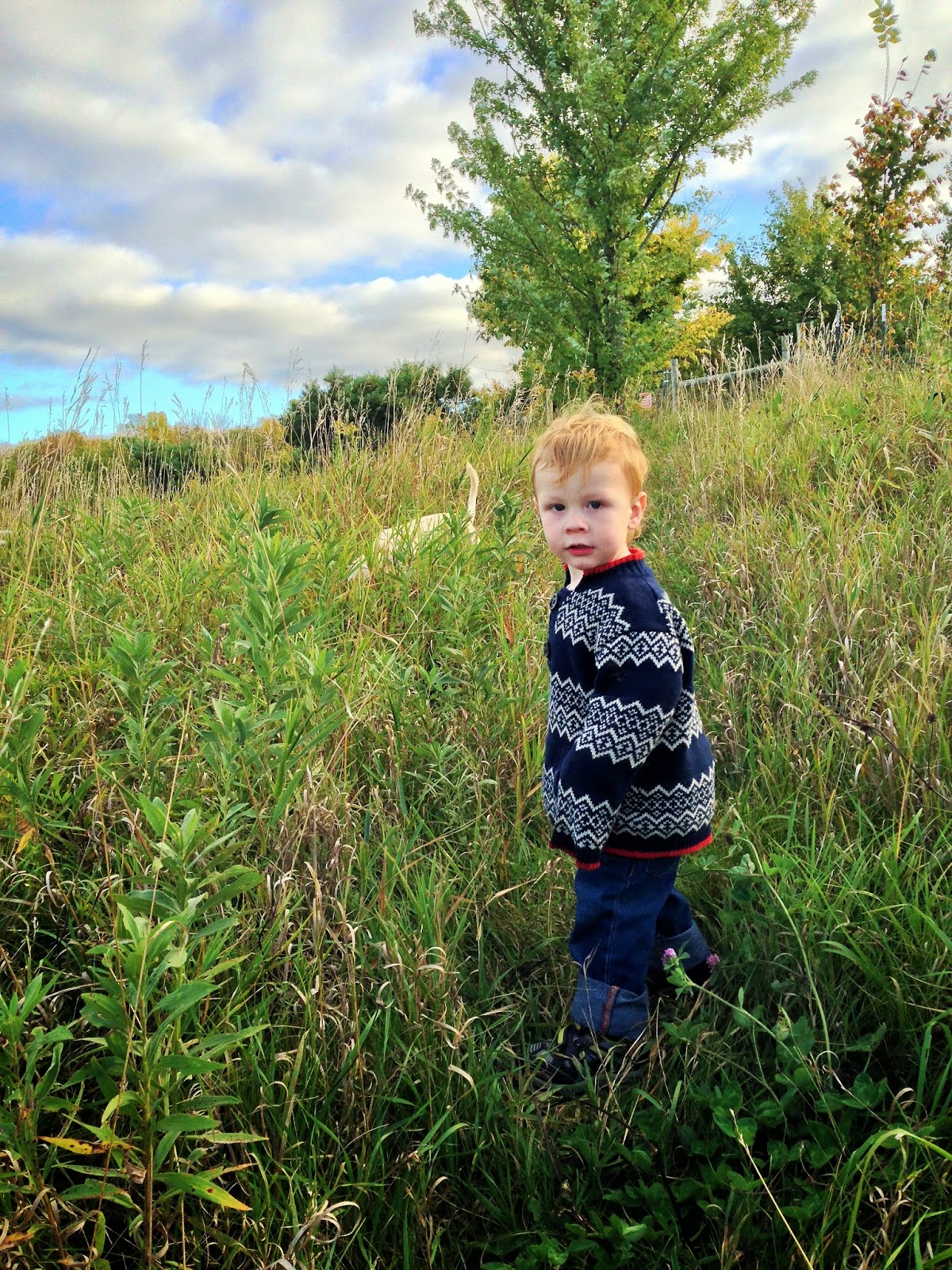 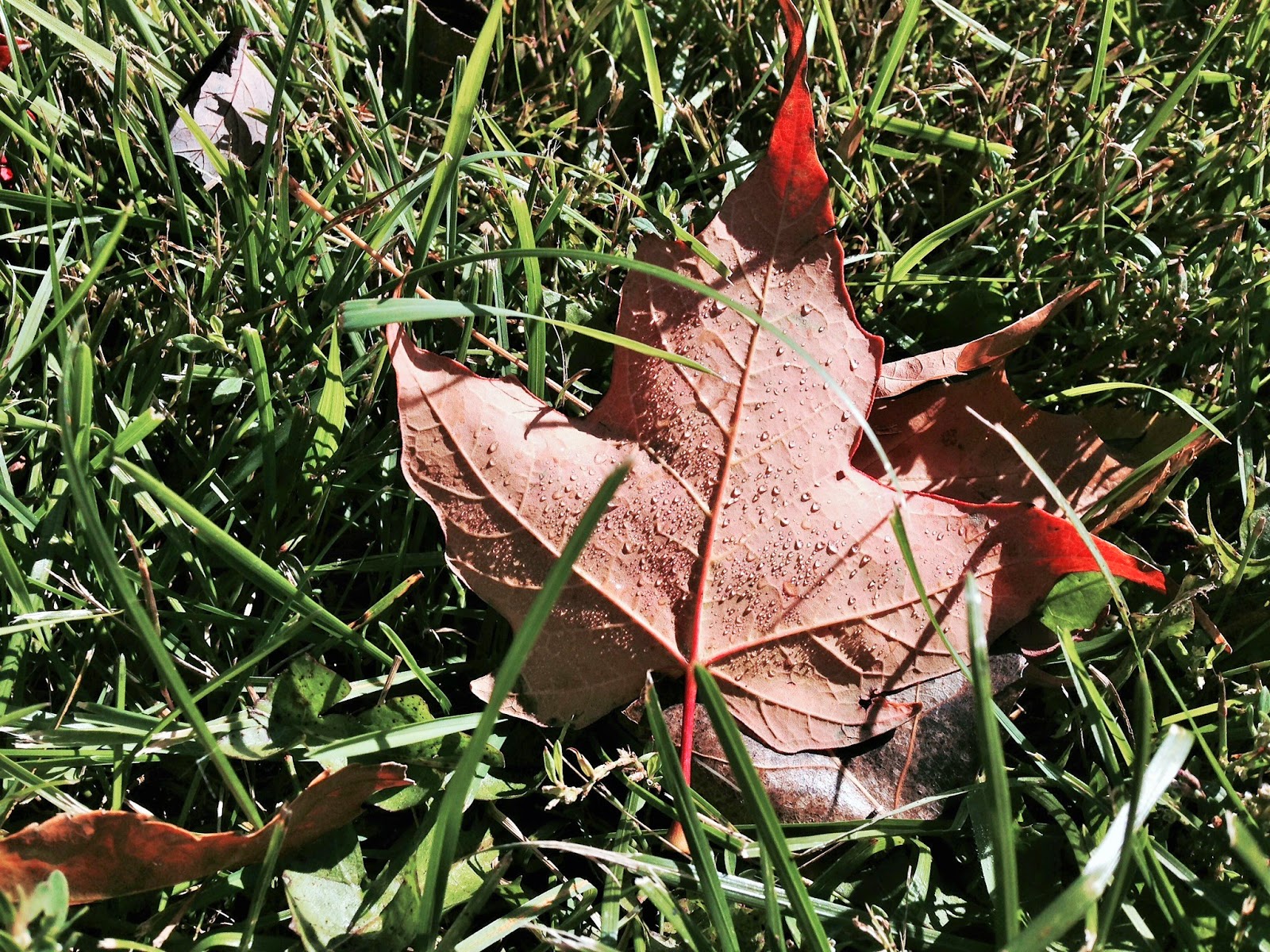 Evening dew gathering.
Thanks for visiting and
Shine On!
Posted by Appleshoe at 8:00 AM 2 comments:

A Letter to my Son 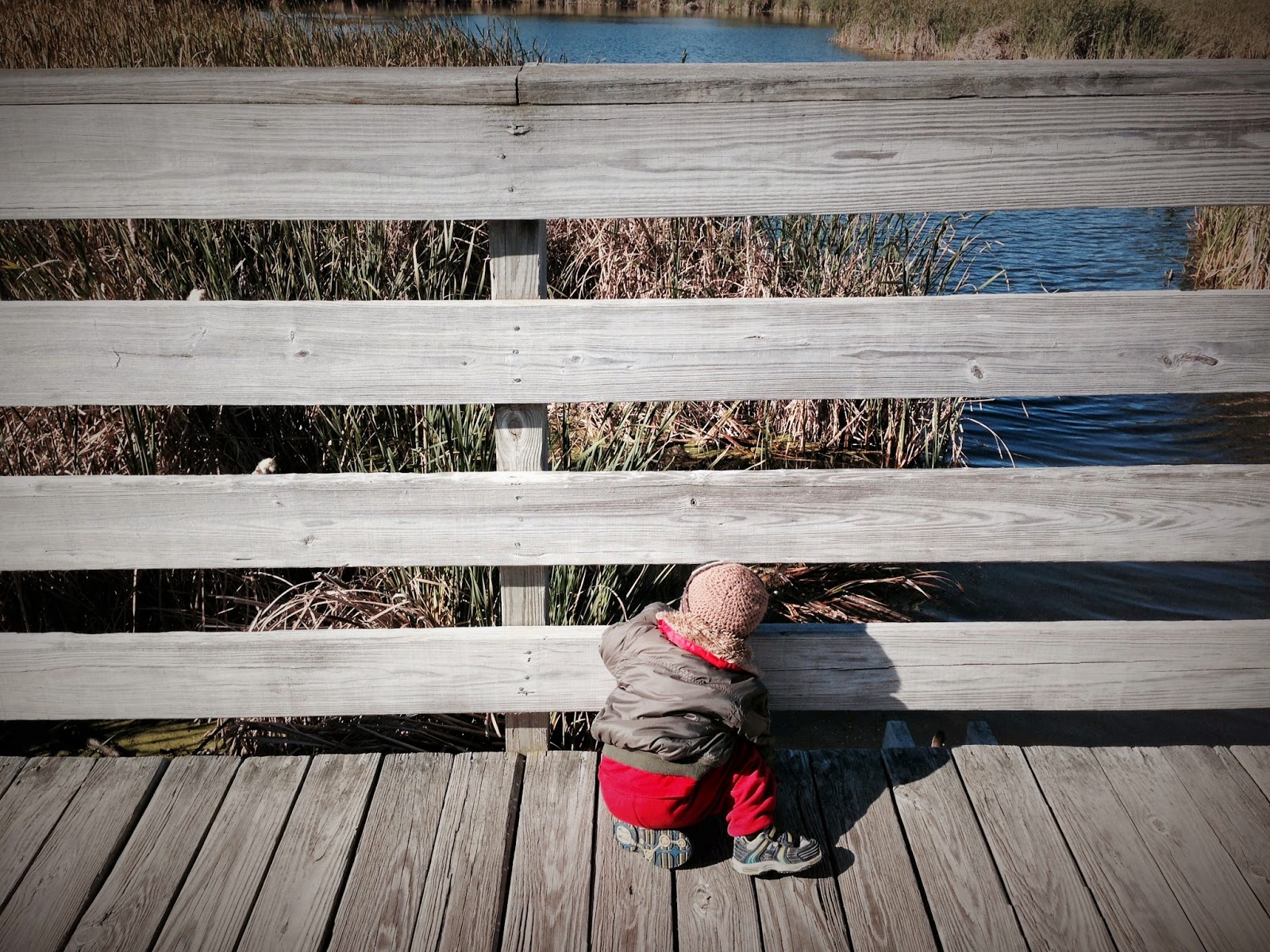 Dear Son,
The air is getting crisper. The mornings frosty. We can see our breath during our morning walks and what looks suspiciously like frost in some areas of the grass. The other day I could have sworn I saw a few flurries drifting down. It feels like we are in store for an extra cold and blustery winter. My bones ache. I didn't want to go on our morning walk today, but you needed to get out. You and I have been fighting an annoying little bug this past weekend, and cabin fever was setting in. You have been an explosive, wall climbing, ball of energy, and the back yard has not been enough to settle you lately. So we bundled up and out the door you sprinted like an happy untamed breeze.
You were so excited to be out on our walk and lead the way to the duck pond, a whirlwind of life and joy. Your not so tiny feet marched along the wood bridge. You love the sound they make and pounded a steady beat for us. Energetically singing and chanting with those words that only you can understand just yet.
And then it happened...
You sat down...
For almost half an hour you sat there watching the ducks floating by.
Barely moving.
Wrapped in awe.
I stood by, equally mesmerized by you.
My beautiful son, you are a force of nature when you so choose to be. Normally that means to me a hurricane of energy, but sometimes you remind me that nature can also be soft, subtle, and quiet. I was going to shoo you on our way, but decided to hold back and wait until you were done observing. There was no rush. Just a quiet lesson to be learned. Thank you for teaching me daily.
With all my love. Shine on.
Love Mum~

A Friday ritual. A single photo-no words- capturing a moment from the week. A simple, special, extraordinary moment. A moment I want to pause, savor and remember."SouleMama".

A Doll and a Lesson 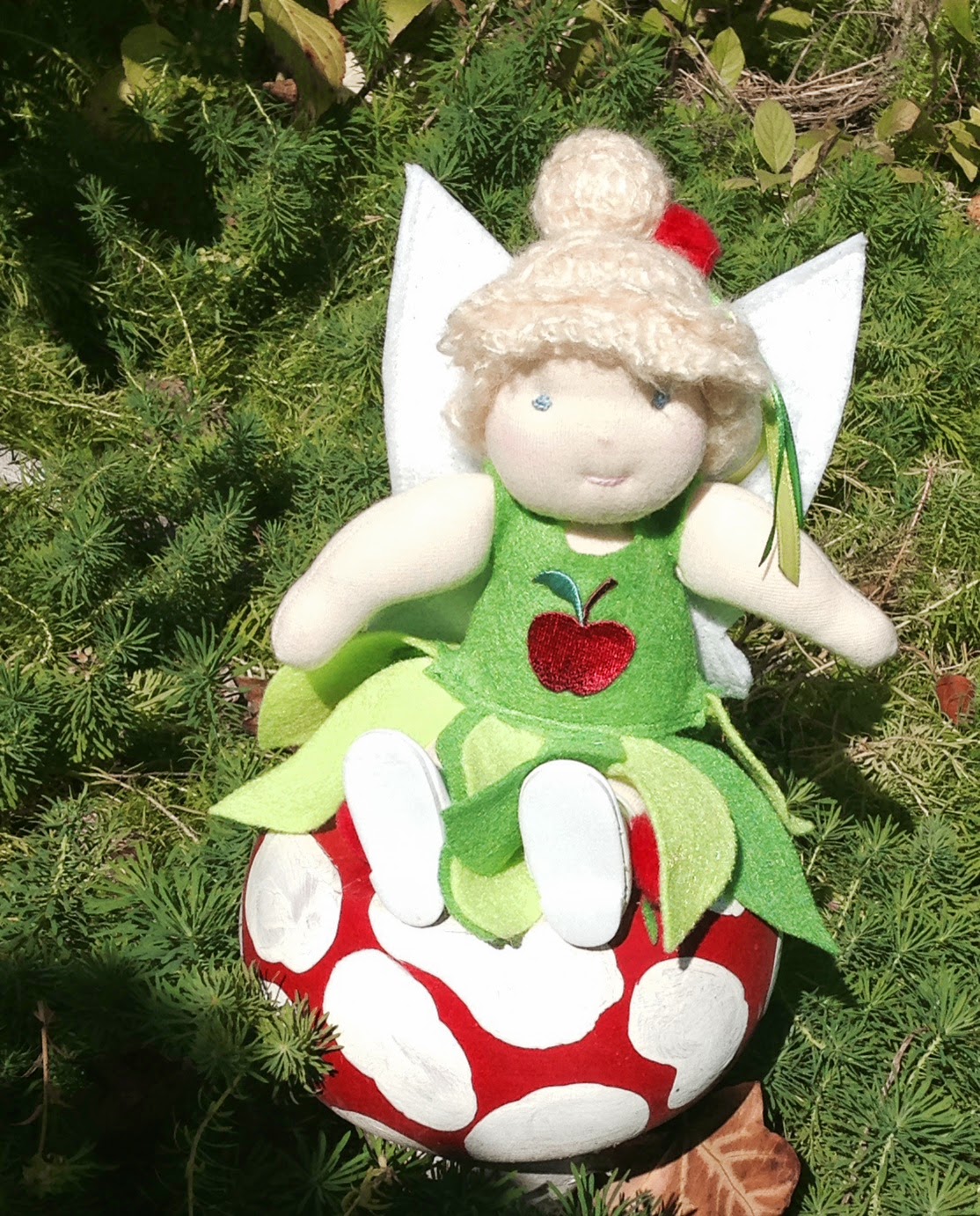 Meet Apple. She is Panda's newest buddy. Named Apple because it is that time of the year, apples are Panda's favorite thing, she is about the size of a large apple, and because it was a fitting name. This is about the 100th Waldorf doll that I've made. One of the smallest dolls I've made (just slightly over 7 inches tall). And quite possibly my favorite doll. You see, Apple taught me a valuable lesson. 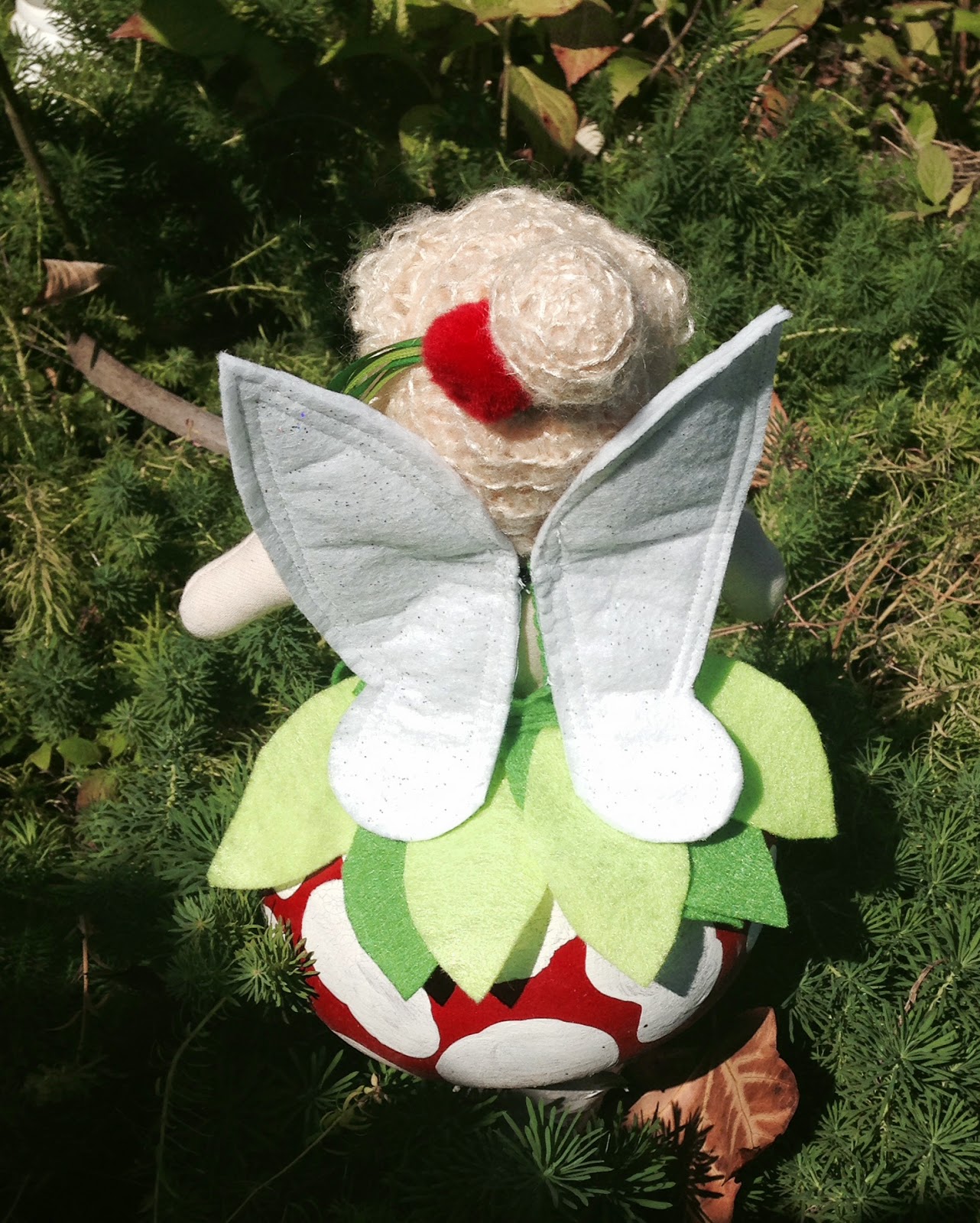 Apple began as a project for an up and coming road trip. Originally I thought about making her into a Tinkerbell doll for a car buddy. We don't watch a lot of television, but recently we relented and Panda has been allowed to watch a movie about once a month (sometimes less). He is enamored with Disney's Tinkerbell. I know, Disney! Not my favorite either, but it is the only thing that seems to calm him down when the barometric pressure changes are incredibly painful. I know that's what causes the upset because I can feel them to. 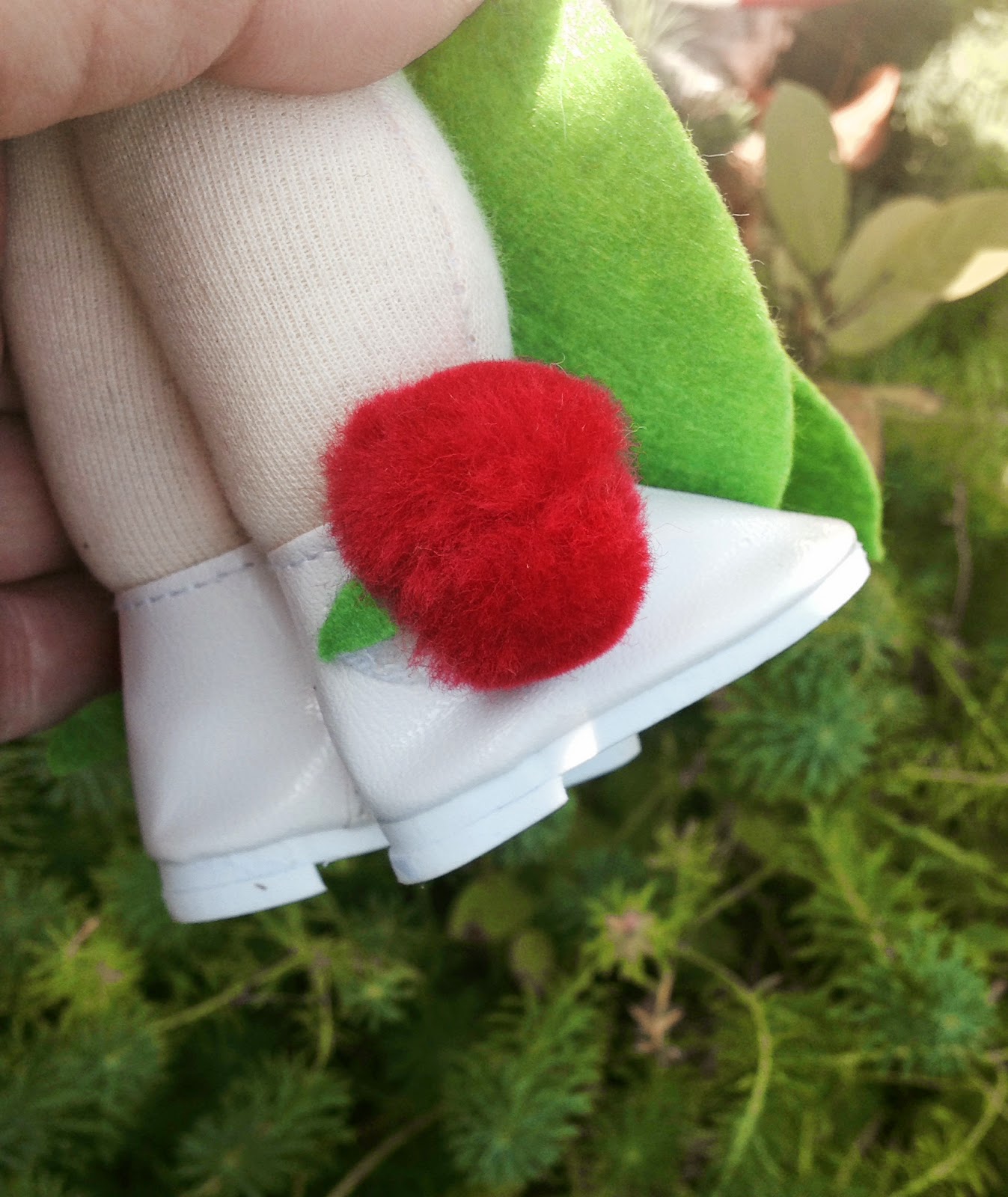 I battled back and forth about making a character tie-in doll. I'm not much for commercialization, but I knew he would love a fairy. I argued back and forth with myself about how I would embellish this doll. I wanted to honor his interests and make him a doll he would be interested in, but I also wanted to honor our family's choice to not buy into commercialization and the media. I wanted to make him a "buddy". 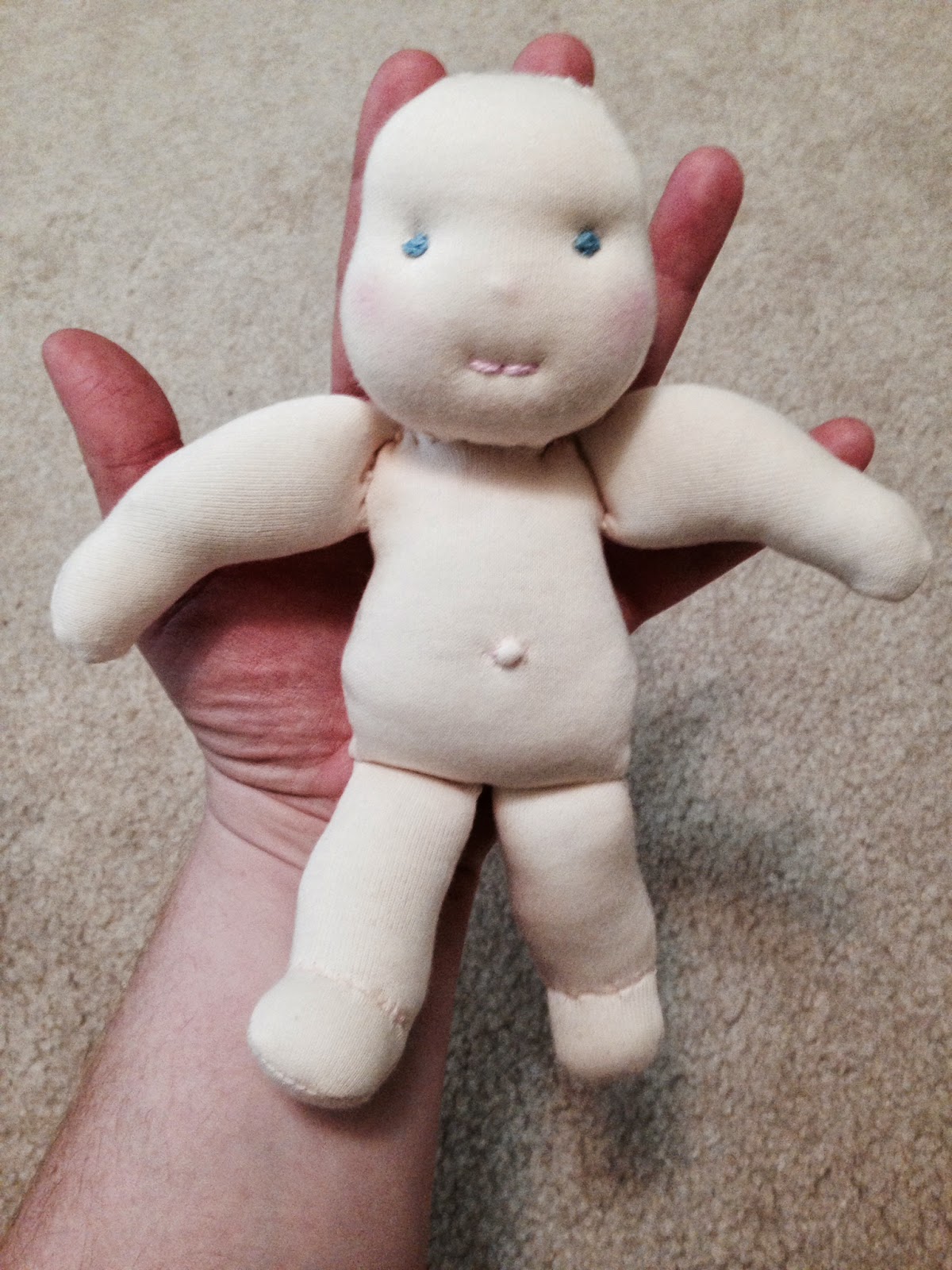 Panda solved my dilemma. He loved her before she was finished and kept trying to take her out of my sewing machine. Heck, he did this before she even had a head! It didn't matter what she looked like. He even chose the yarn for her hair, which was not the Tinkerbell yellow I had sitting out. It was the only skein of soft mohair I own. I had purchased it many MANY years ago to repair my niece's lovey Waldorf doll "PrettyFlower", it had been sitting forgotten in the bottom of my yarn basket. Panda pulled it out and stuck it on her head while I was showing him different yarn wigs. He insisted the soft mohair was what she needed. 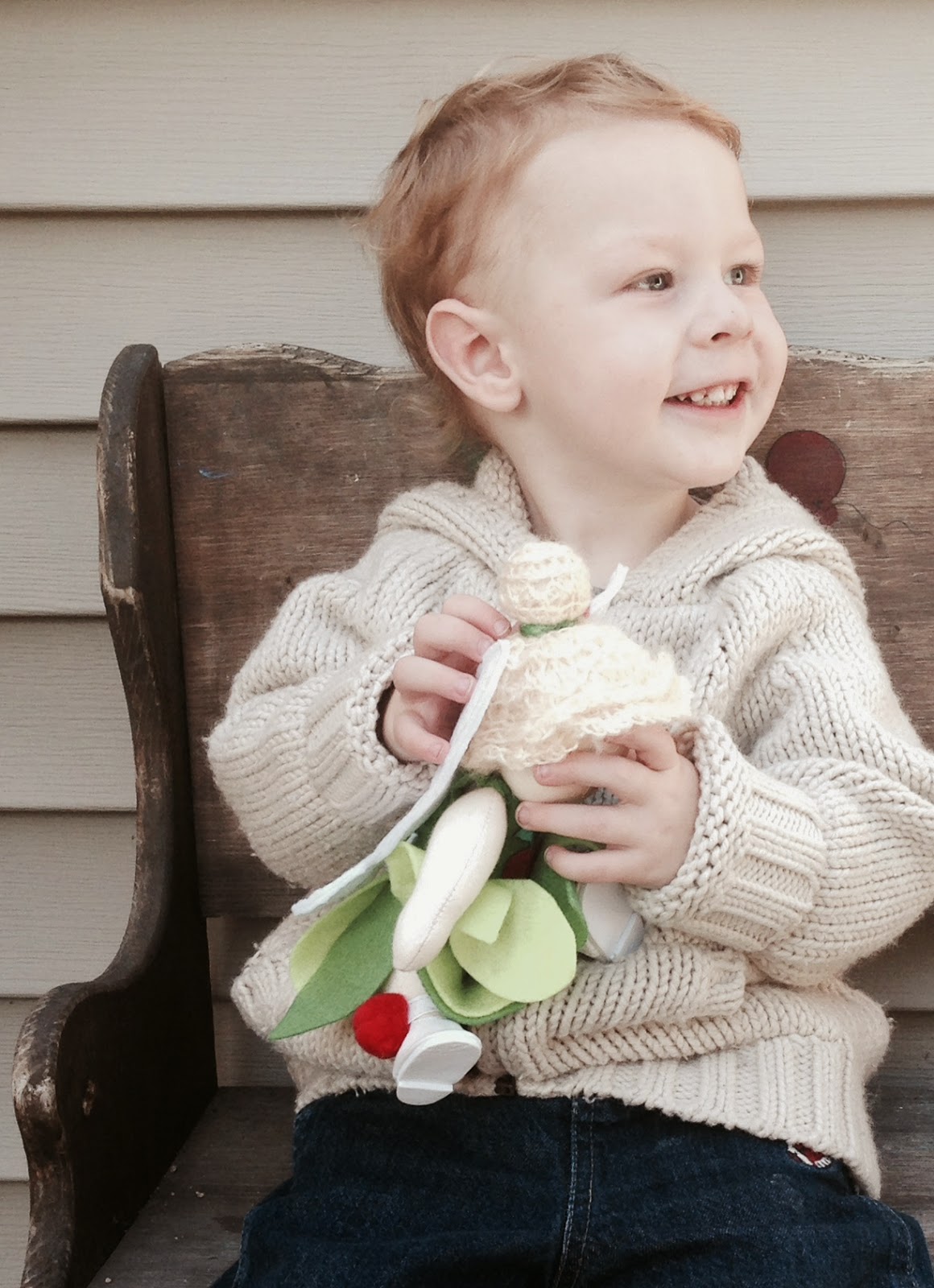 Tinkerbell is not the only fairy that captures Panda's interest right now. There are also the Tales of Tiptoes lightly, and many nature fairy and gnome books. To honor his love of faeries in general I gave Apple wings and a look all of her own. Her wings are attached to her dress so one day when he outgrows fairies I can just give her a new outfit. 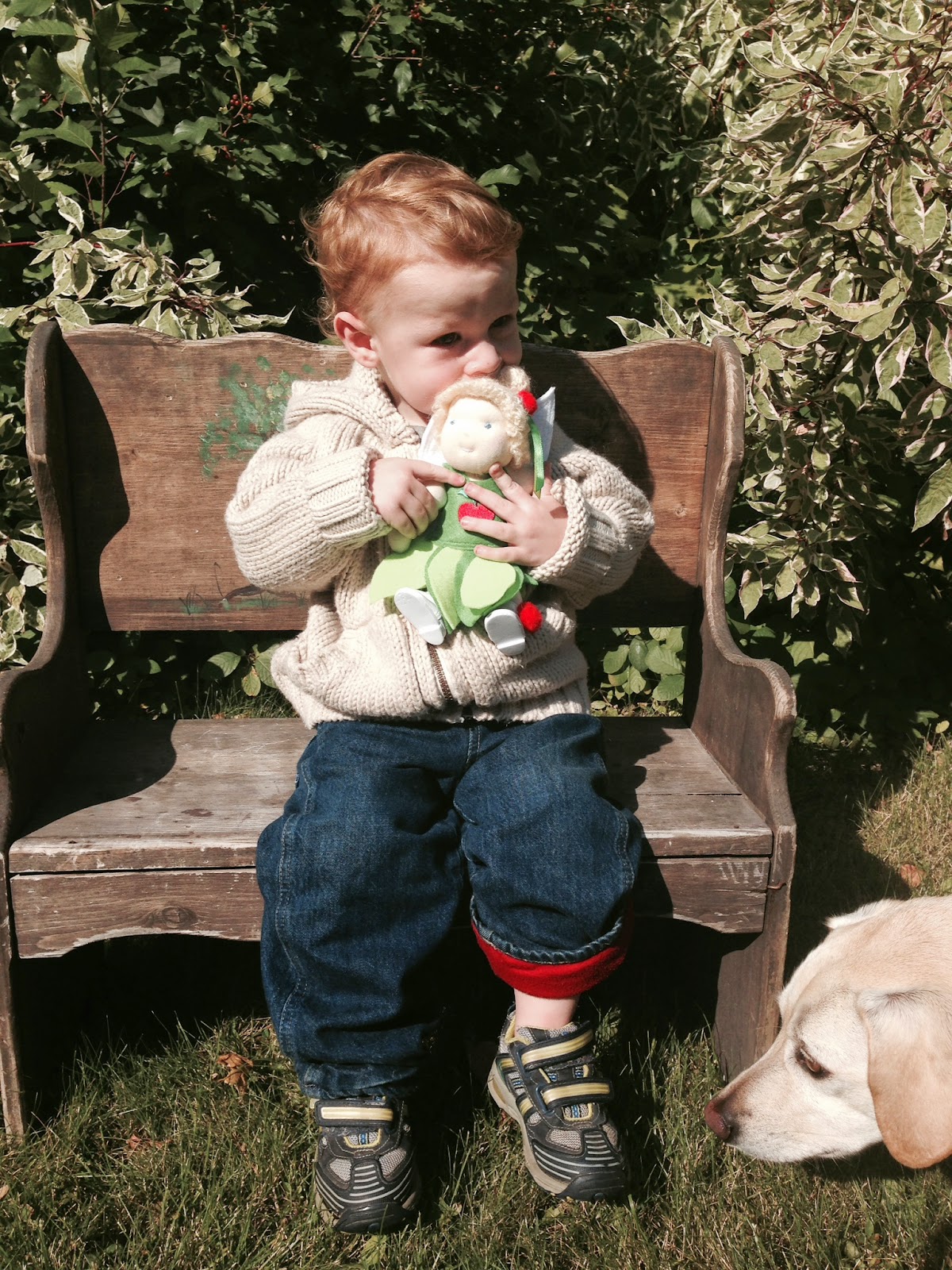 Such a simple lesson. Such a simple and profound love. These two are a matched pair. My son loves her, not because she is stuffed with wool (though she is warm and soft to hold), not because of her tiny size (though that helps to), not because of the tiny red satin heart stitched inside, not because of her name, or even how I decided to embellish her. To my son all that matters is that he watched her being made by his mum. A special gift made just for him, born of  a mother's love, and stitched into every inch of this tiny doll. And THAT is the lesson this little doll taught me.
Welcome to the family Apple. May you bring many years of happiness to my dear son.
Shine on!
Posted by Appleshoe at 2:22 PM 5 comments: