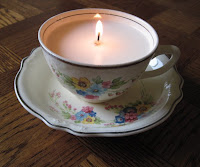 This is a simple fast craft that works well as a last minute gift idea. You will need candle wax, a wick, a teacup or pretty mug, candle fragrance is optional. I used microwaveable wax and pre-waxed candle wicks. I also used some vanilla candle fragrance. I've been holding on to this teacup for a while. The inside of the cup is crazed and heavily stained, but I could not bear to throw it out.. Turning it into a candle gives it new life.

Once you have your supplies together slowly warm the teacup on a hot water bottle. If the cup is to cold the wax will not stick to the cup properly. While the cup is warming melt the wax for the candle. I chose soy because it burns slower and cleaner than paraffin wax; it is also cheaper. I added half a teaspoon of vanilla candle fragrance. Soy can be difficult taking the sent properly so you might have to experiment a little. The wax melted in about 45 seconds in the microwave.

Use some of your melted wax, or wax from another candle to secure the wick in place. Next slowly pour the melted wax into the teacup till it is filled. I like to leave a little bit of room at the top. Put the teacup somewhere it will not be disturbed. It will take an hour to an hour and a half to set. Once it's set the wax will be a frosty white. Trim the wick to one fourth of an inch and your candle is done. Have fun!
Posted by Appleshoe at 2:14 PM