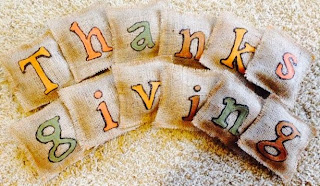 I used a cinnamon broom from Trader Joe's, Burlap, and Autumn colored felt for this project.

I cut the burlap into 5X5" squares. Then I cut out felt letters and sewed them on (I wish I had left them like this, but I later outlined them in black fabric paint to make them stand out more; they camouflaged with the bricks of my fireplace pre paint). Then I sewed The squares into pillows and stuffed them with fabric scraps and chopped up cinnamon broom ( I used garden clippers for that part). My little pillows were meant for the mantle but look great in a basket and on the back of my sofa, The room smells wonderful. I might need to make another set for Christmas.
I hope you like this project. Be well and Have fun!
Posted by Appleshoe at 10:56 AM